There are many versions of backup power systems. This article will discuss the various types of PV power backup systems and how they are utilized.

Battery banks store DC electrical energy for later use. Battery banks can be used to maintain power to critical loads such as lighting, refrigeration, and HVAC when a utility power outage occurs. However, there are some disadvantages to using batteries for backup power, including expensive installation, maintenance requirements, and replacement needs that often occur before other parts of the PV system.

NEC® Section 690.13 states that means shall be provided to disconnect a PV system from all wiring systems, including power systems, energy storage systems, and utilization equipment and its associated premises wiring.

A battery charger is a device used to put energy back into a rechargeable battery. Although many battery chargers charge at a constant rate, some models with micro-processors can switch off when the battery is fully charged. Microprocessor battery chargers can recognize how much charge was originally in the battery, and they can also indicate when adding water is necessary for liquid-based batteries. The rates at which batteries should be charged are determined by the manufacturer.

A battery management system (BMS) is an electronic system that protects and manages rechargeable batteries from operating outside their safe operating area. A BMS controls parameters such as battery temperature, depth of discharge (DoD), and state of charge (SoC) so that batteries are not overcharged or undercharged, which can affect battery life. A BMS is a software program that can be internal to a charge controller or on a separate circuit board installed at each battery. A BMS continuously measures battery voltages and currents and uses battery sensors to communicate abnormal measurements with external energy management systems.

A BMS is critical when using lithium-ion batteries because it regulates battery charging to obtain the best performance from the battery. However, when lead-acid batteries are used, a BMS is not critical. This is due to less risk of thermal issues and because the inverter or battery charge controller usually handles this charging process.

A PV storage battery is a deep-cycle battery that provides energy storage for a PV system and is designed to be charged and discharged repeatedly. To maintain PV storage batteries in good condition and prolong their lifespan, manufacturers recommend limiting DoD to no more than 50%. PV storage battery cost is based on the battery material, capacity, depth of discharge, and lifespan.

Figure 1. Although lithium-ion and lead-acid batteries are the most commonly used types of batteries in PV systems, each type of PV storage battery has advantages and disadvantages.

A battery's reserve capacity indicates how much time is available to keep equipment running when a charging system is not in place or has failed. New battery technology is leading to more powerful batteries with a lower footprint (see Figure 2). Information needed to select the proper battery capacity includes average daily kilowatt-hours (kWh) used, energy used from summer to winter, and the appliances the batteries must supply power to and for how long. 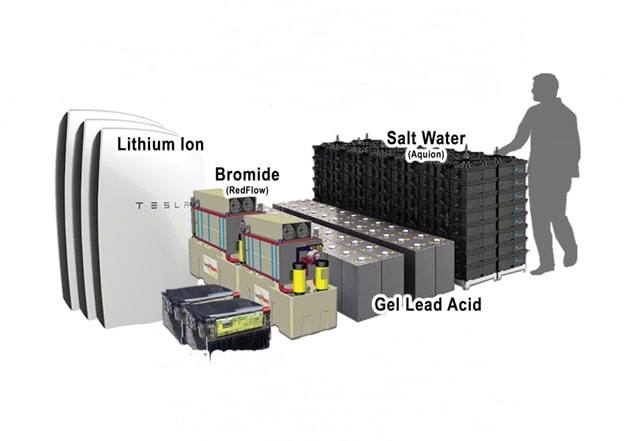 The lifetime of a battery must be specified in different ways depending on the application. For solar applications in which the battery is regularly charged and discharged, the most useful measure of a lifetime is the number of charge/discharge cycles over which the battery maintains its capacity. This measure is called cycle life.

A battery's DoD refers to the amount of capacity that has been used. Because solar batteries are composed of electrochemical cells, they must always keep some charge since their useful life will be significantly shortened if a load uses 100% of their charge.

Most manufacturers will specify a maximum DoD for maximum performance. For example, if a 10 kWh battery has a DoD of 80%, it should not use more than 8 kWh of the battery before being recharged.

The age of a battery has a major impact on its capacity. The capacity will stay at or close to the battery's rated capacity for only a limited number of charge/discharge cycles, even when the manufacturer's specifications on DoD are followed. Battery lifetime is typically affected by the gradual degradation in battery capacity, which is determined by charge/discharge cycles.

The safety regulations for each type of battery should be carefully checked. Battery systems used in renewable energy systems contain corrosive or dangerous chemicals and produce large currents. For example, lead-acid batteries produce hydrogen. Since most batteries contain toxic and/or corrosive material, it is important to safely dispose of the batteries to minimize any impact on the environment.