Solid Power’s battery is a silicon all-solid-state battery that is supposed to be used to power and store energy for electric vehicles. The data in the report show that the cell meets the key requirements to operate in the automotive industry.

The key requirements for a battery to be standardized in the automotive industry are the capability to pack high energy, high retention rate at a high cycle life target, quick charging, temperature tolerance at low and high temperatures, and promising early performance. 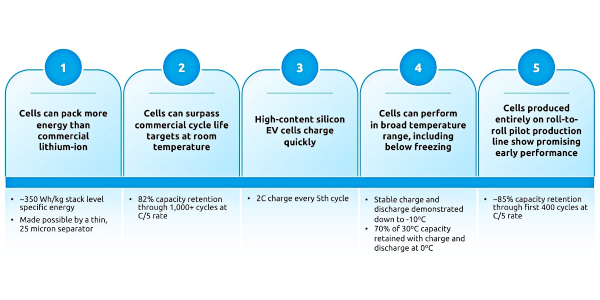 The tests show a long cycle life where it achieved more than 1000 cycles at room temperature and the same statistics when operating at 45 degrees celsius. At both tests, the battery was also able to preserve a high capacity retention rate above 80% after 1000 cycles at a C/5 rate. 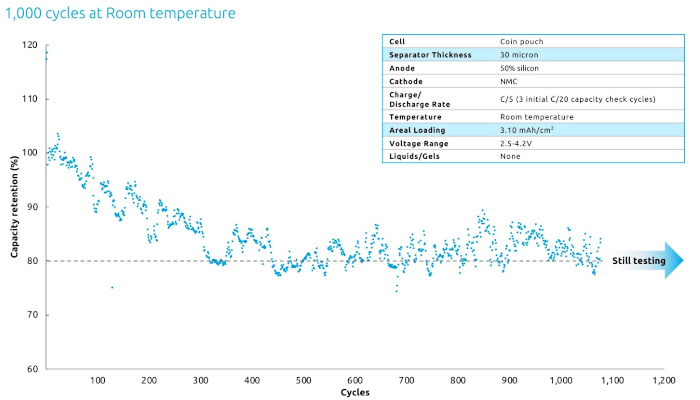 A graph from Solid Power shows the capacity retention/Cycles for their High-Silicon battery. Image courtesy of Solid Power.

Fast Charging is becoming a requirement for EV batteries. The tests showed that the High-Silicon Cell could stand up to 650 cycles with a C/2 rating at nearly room temperature conditions.

Also, low-temperature tests were performed. The cells were subjected to a C/10 charge/discharge rate. The results are shown in the figure below.

“As Solid Power gears up to enter the automotive qualification phase, we are laser focused on optimizing cell design in order to meet or exceed all of our customer’s requirements,” said Josh Buettner-Garrett, Chief Technology Officer at Solid Power. “We are now working to replicate these initial results in a larger format, production-line produced cells.” 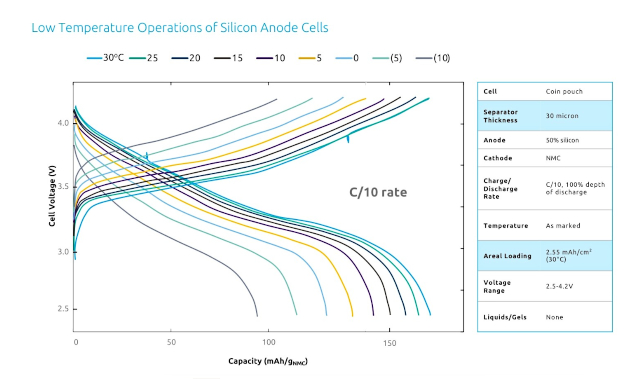 First of all, to overcome the flammability problem of conventional lithium-ion batteries, Solid Power replaced liquid and gel electrolytes with a sulfide-based electrolyte.

Then a non-profit research and development organization performed different abuse tests on Solid Power’s 2 ampere-hours high-content silicon battery that satisfied the standards set by the Society of Automotive Engineers.

The cells then were fully charged and subjected to short-circuit. The cells didn’t show any hazards such as flame, venting, or loss of material during the test.