The method, which utilizes electrostatic induction, has significant implications for water-limited regions, especially those in the developing world.

Every year, nearly 10 billion gallons of water is used to rid solar panels of performance-limiting dust. The implications of that total are staggering: 10 billion gallons is enough to keep 2 million people in developing countries well-hydrated throughout the year. And the desert regions in which large-scale photovoltaic (PV) farms are most viable are also those most vulnerable to deadly drought.

Solar farms are most viable where water is least prevalent. Image used courtesy of Antonio Garcia/Unsplash

But researchers at the Massachusetts Institute of Technology (MIT) may have developed a crucial alternative to water-based cleaning. Publishing in the March issue of the journal Science Advances, Sreedath Panat and Kripa K. Varanasi utilized electrostatic induction to “actively charge” the mineral dust coating lab panels, propelling them from the panels’ surface via the introduction of voltage to the panels themselves.

Dust removal using electrostatic energy has been proposed previously, but the methods presented have been limited. Mesh-like arrays of electrodes, called electrodynamic screens (EDS), serve as one such example.

While EDS systems have been successfully implemented, they are most effective in environments defined by an extreme lack of moisture, such as those found on the surface of Mars. On Earth, though, moisture is far more pervasive even in deserts, and particles of water can over time intrude into the mesh and short-circuit its electrodes, causing system failure. What’s more, EDS systems are prohibitively expensive to install, making them a poor option for commercial application.

Panat and Varanasi’s system utilizes a single electrode that slides along a rail above the surface of a solar panel array, in the process imparting a charge to their accumulated dust particles. When the particles are charged, a repulsion force is generated between them. And when an equivalent charge is then applied to the panels, the force repels the dust from their surface. 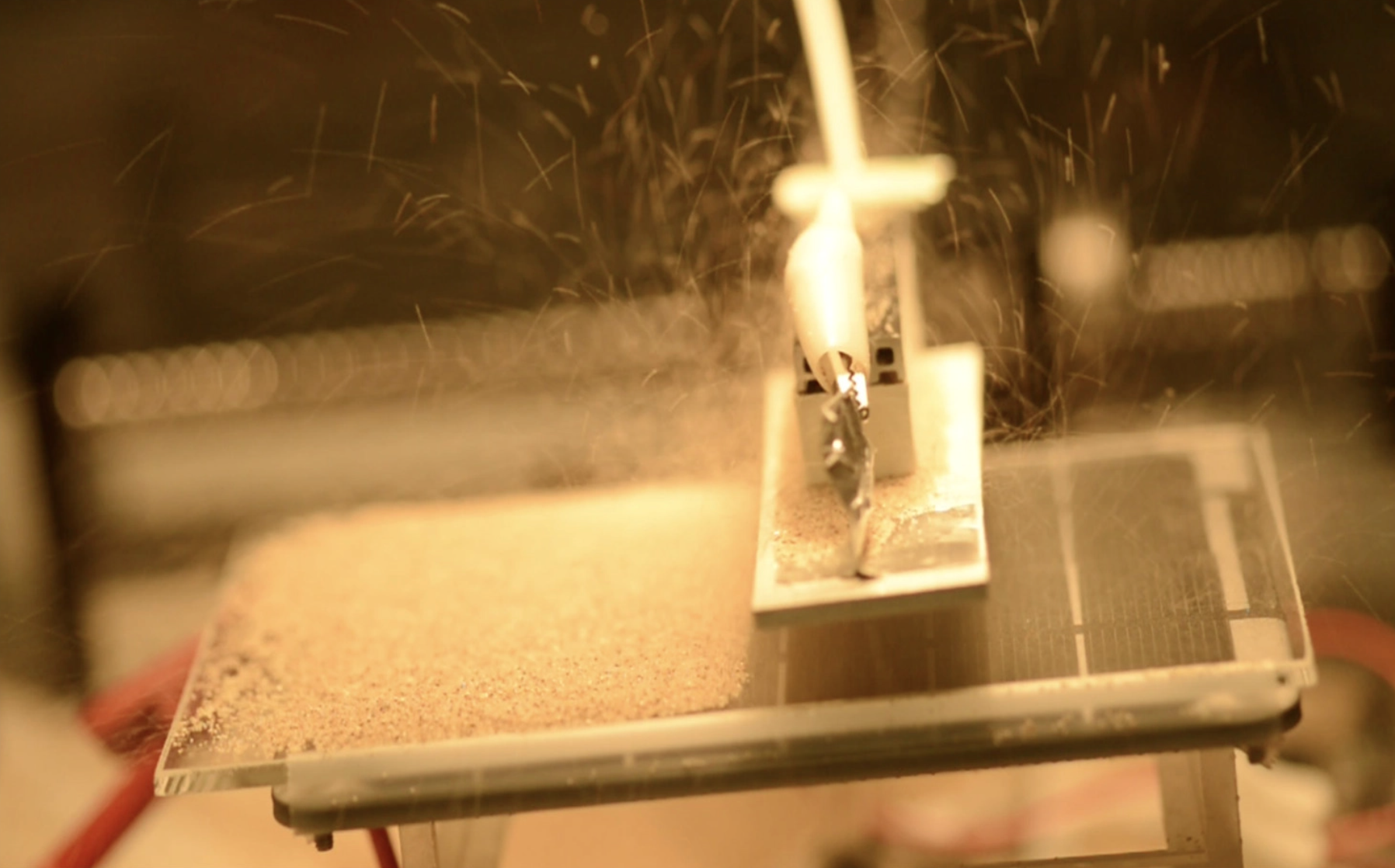 Panat and Varanasi performed their experiments in an environment with relatively moderate humidity, around 45 to 55%, to estimate the amount of charge needed to repel the dust. The pair found that to start moving the particles, they needed to apply a voltage of 12 kilovolts.

In their work, Panat and Varanasi opted to use Arizona test dust as their particulate matter of choice. The composition of Arizona test dust emulates that of the mineral dust found in deserts, which was crucial for the researchers’ experiments.

The dust is caught from the air behind tractors or other pieces of industrial equipment operating in Arizona’s Salt River Valley. It is then sifted through a pair of incredibly fine screens, yielding final particulates no larger than 53 microns.

The Effect of Humidity on Dust Removal

Humidity is a crucial factor in electrostatic repulsion cleaning. The method works only if moisture has stuck, or adsorbed, to the dust particles coating a panel. Thanks to their disruption of forces, among them gravitational and adhesion, films of moisture on silica particles’ surfaces create energy. And that energy has to exist to repel the dust particles from the panels. 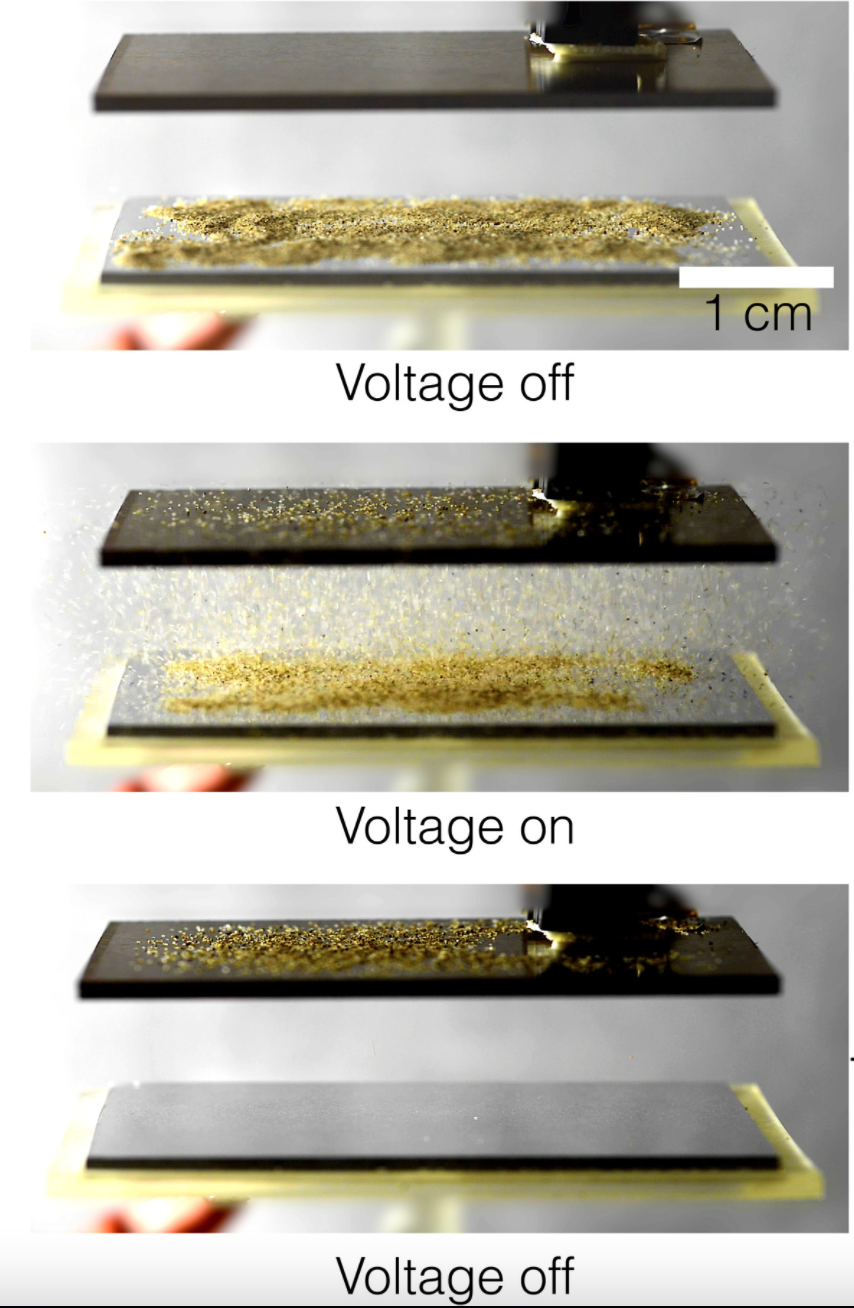 Given the ever fluctuating nature of humidity, Panat and Varanasi devised a method to test dust removal at different humidity levels. They found that the removal process was highly effective at relative humidities between 30% and 95%.

That’s good news, says Varanasi, as even the driest deserts fall in that range at some point during the day, either at night or, more commonly, in the early hours of the morning. Cleaning could therefore be timed accordingly.