To stimulate industrial growth in the COVID-19 pandemic, MEAN WELL will issue credits on purchases made by its distribution partners through the end of this year. The Taiwan-headquartered power supply manufacturer has over 200 authorized distribution partners around the world, according to its website. 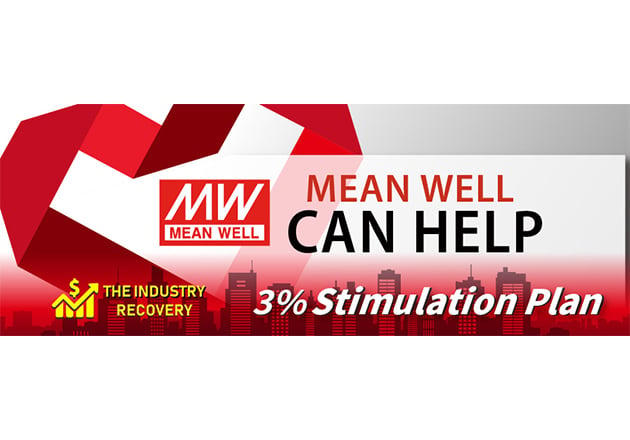 For its part, MEAN WELL and its branches will contribute 3% of Q4 2020 sales revenue to the program and donate the remaining unclaimed reward balance to a local charity.

In announcing the “Stimulation Plan” program, MEAN WELL stated that it aims to apply the “power of stability” to assist economic recovery in the power supply industry, and it encourages other companies to join and promote the effort.

Since January 30, MEAN WELL Group has provided near-weekly coronavirus updates across all of its branches worldwide. In addition to its global headquarters in New Taipei, Taiwan, the company has branches and sales offices in China, the U.S., and the Netherlands, as well as four production facilities in New Taipei City and in China’s Suzhou City and Guangzhou province.

In the latest COVID-19 update, dated September 29, the head of MEAN WELL’s Taiwan headquarters stated that operations are continuing with a new assembly line opening in October. MEAN WELL Taiwan Associate General Manager Alex Tsai added that with orders from mainland factories, the headquarters operation has “begun to quickly replenish inventory in October, in response to the Q4 market demand and rapidly increasing the two-day delivery rate.”

Global COVID-19 cases surpassed 34 million on October 1, with more than 1 million total deaths. As reflected in recent earnings trends, the power electronics industry at-large is slowly recovering from a steep drop in sales and supply chain production, particularly in the automotive market.