Leti, a research institute of CEA Tech, and Oscaro, a leading European e-business company that specializes in the sale of new and genuine automotive parts, announced during Leti Innovation Days that Oscaro will develop Leti's new Foxy technology to track millions of parcels shipped to customers by e-business.

Developed by Leti, the award-winning Foxy is a single-chip, sub-GHz transceiver designed to connect items to Internet-of-Things (IoT) networks, anywhere in the world. It enables both marginal cost, event-based, massive IoT applications and long-lasting IoT scenarios. Thanks to the optimization found on Foxy, battery lifetimes up to 10 years are possible.

"As a major parcel-delivery and e-business company in Europe and the U.S., Oscaro provides a strong case study of Leti's ability to deliver a breakthrough, consistent integrated solution for logistics," said Leti CEO Emmanuel Sabonnadière. "Its differentiator lays in the low-power consumption and previously developed, very cost-effective die that is perfectly suited for e-business."

"Oscaro needed a low-cost, low-power and reliable parcel-monitoring system that allows us to track our packages in Europe and the U.S. In other words, the real challenge is to give the real power back to the final customer for parcel tracking" said Pierre-Noël Luiggi, founder & CEO of Oscaro. "Leti meet our needs with a robust, dedicated transceiver that is price competitive with other devices on the market."

Foxy is a single-chip Sub-GHz transceiver that connects Things to the Sigfox network, anywhere in the world, enabling:

Event-based IoT applications thanks to its:

Complex IoT use cases thanks to its:

Foxy is the first wireless transceiver dedicated to UNB. Foxy is a low power, low cost 65nm CMOS transceiver that allows GFSK and DBPSK modulations as well as data rates from 100bps to 20kbps. Foxy covers the complete Sigfox specifications including ETSI, FCC, ARIB and AUS/NZ bands and its TCXO-less protocol.

Going beyond Sigfox specifications, Foxy can push the UNB paradigm to its limits. Indeed, at ultimate narrow bandwidths, this technology is historically limited by Carrier Frequency Offsets (CFO) and drift, classically mitigated using a precise but costly TCXO.

Thanks to Foxy's unique capabilities, unprecedented bandwidths of 100Hz can be achieved even in the downlink, without a TCXO. 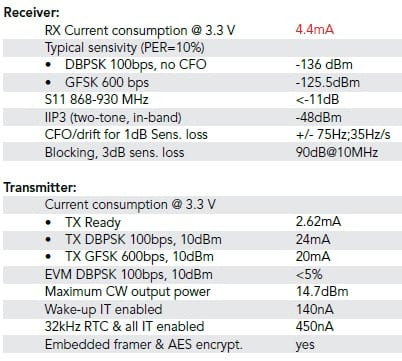