Imagine a world where cell phones and laptops can be charged in a matter of minutes instead of hours, rolled up and stored in your pocket, or dropped without sustaining any damage. It is possible, according to University of Delaware Professor Thomas H. Epps, III, but the materials are not there yet.

So, what is holding back the technology?

For starters, it would take more conductive, flexible and lighter-weight batteries, said Epps, who is the Thomas and Kipp Gutshall Professor of Chemical and Biomolecular Engineering and a professor in the Department of Materials Science and Engineering at UD.

The batteries would need to be more impact-resistant and safer, too. In May, an e-cigarette exploded in Florida and killed a man. Evidence reportedly suggests that this unfortunate accident may be due to battery-related issues, according to the U.S. Food and Drug Administration. Similar problems have plagued devices like the Samsung Galaxy Note 7 and auxiliary power units of the Boeing Dreamliner.

“All of these challenges came from batteries that have safety and stability issues when the goal is to push performance,” said Epps, an expert in designing and fabricating conducting membranes useful in energy generation and storage devices.

One way to overcome this challenge in the lithium-ion batteries for the above devices is to improve the battery membranes — and the associated electrolytes — that are designed to shuttle the lithium ions, which offset the electrical charge associated with charging and discharging the battery.

At UD, Epps’ team has patented an idea to improve battery performance by introducing tapers into the polymer membrane electrolytes that allow the lithium ions inside the battery to travel back and forth faster.

It is a big idea that begins with tiny parts. 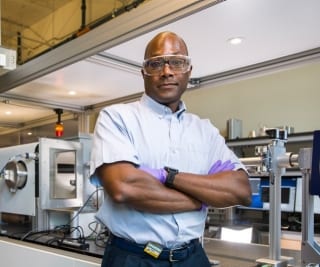 At UD, Prof. Thomas H. Epps, III and his team have patented an idea to improve lithium battery performance.

It all starts with polymers, which are materials made of small molecules strung together like beads on a necklace to create a long chain. By chemically connecting two or more polymer chains with different properties, engineers can create block polymers that capitalize on the salient features from both materials. For example, polystyrene in a Styrofoam cup is relatively hard and brittle, while polyisoprene (tapped from a rubber tree) is viscous and molasses-like. When those two polymers are linked chemically, engineers can create materials for everyday items like car tires and rubber bands — materials that hold their shape but are impact resistant and stretchable.

Epps was introduced to block polymers as an undergraduate student at the Massachusetts Institute of Technology while working in the lab of Professor Paula Hammond, and again when he worked at the Goodyear Tire & Rubber Company under Adel Halasa as part of a GEM Fellowship. Goodyear was exploring the use of taper-like multi-component polymers to create tires with more elasticity, tires that would grip the road better without sacrificing performance or durability.

Years later, in work at UD, Epps’ group took the idea a step further and realized they could tune the nanoscale (1/1,000th the width of a human hair) structure of these polymers to imbue materials with certain mechanical, thermal and conductivity properties.

One of the benefits of block polymers is that they allow scientists to combine two or more components that often are chemically incompatible, meaning they do not mix (think of oil and water). This same benefit, however, can present challenges with how the materials can be processed.

The Epps group determined that tapering the region where the two distinct polymer chains connect can promote mixing between highly-incompatible materials in a way that makes processing and fabrication faster and cheaper by requiring either less energy or less solvent in the manufacturing process.

Manipulating the taper also allowed the researchers to control the nanoscale structures that can be formed by the block polymers. By incorporating the tapers, Epps’ team can create nanoscale networks that make the battery materials more conductive—introducing nanoscale highways and eliminating traffic bottlenecks, allowing ions to move at higher speeds and making the polymer more efficient in battery applications.

“Technically, we want to conduct ions faster … this approach in polymers would allow us to get more power out of the batteries. It would enable the batteries to charge faster, in a manner that is also safer. We are not there yet, but that is the goal,” said Epps, who patented the concept through UD’s Office of Economic Innovation and Partnerships.

He calls this work a “designer approach” to polymer science.

Priyanka Ketkar, a doctoral student in chemical and biomolecular engineering, wants to make a difference in the world through research. Ketkar described the Epps research group as a good fit, where she is exercising her mental muscle on consequential problems related to energy storage.

In laboratory experiments, Ketkar and others in the Epps group have shown that introducing a tapered region between polymer electrolyte chains actually increased the overall ionic conductivity over a range of temperatures. At room temperature, for example, the tapered materials are twice as conductive as their non-tapered counterparts. But that is not all. The taper improves the material’s ability to be processed, too.

“Previous methods for increasing conductivity have either made the polymer harder to process or used greater amounts of chemical solvent, which makes the material more flammable and less environmentally friendly,” Ketkar said. “That is why I am really excited about this new approach.”

Other applications include using tapered polymers to make materials that can be produced at lower temperatures or with less solvent for applications such as tires, rubber bands and adhesives.

As technology rockets forward, Epps expects the next five to 10 years will usher in a plethora of devices that can flex and roll, such as cell phones and computers.

“The only way this works is if all of the components are flexible, including the battery and power units, not just the case, screen or buttons,” Epps said. “This aspect is where block polymers become really ideal because — like a rubber band that remembers its shape despite stretching, bending and other manipulation — with polymers, you can make the internal components more impact resistant and shock absorbing, which will improve the phone’s lifespan.”

There may be other applications for designer polymers, too.

“What if there was a sensor inside the football that was designed to alert officials when a player crosses a specific yardage, say for a first down,” Epps said. “You would not need to rely on an official’s on-field view of the play or instant replay.”

But, footballs get thrown around and the players who hold them are often hit.

“You would need something that will not break or leak, so using a polymer that has the material properties of say, a rubber band, that also can conduct ions like a battery would be a perfect solution,” Epps said. “This avenue is one direction in which you could imagine these materials blossoming.”

Epps was recently appointed a fellow of the Royal Society of Chemistry, based in the United Kingdom. To receive this honor, scientists must have made an impact in the chemical sciences.

Funding for this work is from the U.S. Department of Energy’s Basic Energy Sciences program, the National Science Foundation’s Division of Materials Research, and Samsung. Epps’ work includes a collaboration with the National Institute of Standards and Technology, UD’s Center for Neutron Science, and Lisa Hall, an associate professor of chemical and biomolecular engineering at Ohio State University.