AIStorm, an innovator of high-performance AI-in-sensor processors, closed a $13.2 million Series A financing round. The financing round was lead by Egis Technology Inc., a biometrics supplier for handsets, gaming, and advanced driver-assistance systems (ADAS); Other investors included TowerJazz, the global specialty foundry firm that specializes in image sensors for commercial, industrial, AR, and medical markets; Meyer Corporation, a food preparation equipment maker; and Linear Dimensions Semiconductor Inc., a producer of biometric authentication and digital health products.

The company is made up of a team of experienced semiconductor executives and is backed by leading sensor and equipment manufacturers. The company wants to equip the next generation of handsets, IoT devices, wearables, and vehicles with a new approach to AI processing at the edge. The company's technology processes sensor data at the edge using AI and analog systems without the latency and increased power consumption that digitizing the data causes.

"This investment will help us accelerate our engineering & go-to-market efforts to bring a new type of machine learning to the edge. AIStorm's revolutionary approach allows implementation of edge solutions in lower-cost analog technologies. The result is a cost savings of five to ten times compared to GPUs — without any compromise in performance," said David Schie, CEO of AIStorm.

AI Storm points out that using sensor data directly without digitization enables real-time processing at the edge. Processing sensor information at the edge is seen in the semiconductor industry as a way to reduce the cost and security risk associated with transmitting large amounts of raw data from edge sensors.

The company notes that while AI systems require information be available in digital form before they can process data, sensor data is analog. Furthermore, processing this digital information requires advanced and costly GPUs that are not suitable for mobile devices. GPUs require continuous digitization of input data, which consumes significant power and introduces unavoidable digitization delay (latency). AIStorm intends to solve these issues by processing sensor data directly in its native analog form, in real time. 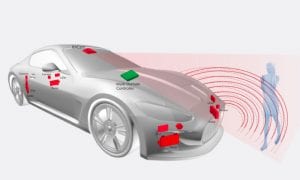 AIStorm's approach to machine learning (Click on image to enlarge).

The company gives some examples on its website of how such edge processing can be useful. "Consider an image sensor watching a warehouse. Only a few pixels are involved with the area around a door in the far corner where an intruder might enter. So the system has to poll or incorporate some complicated handshake scheme with the processing system to try to work out where to focus. No matter how it is done it is slow and complicated.

So why bother? Now consider a camera scanning faces at an intersection. Distractions abound… cars, trees, clouds, winds, rain, snow, debris blowing by. How is a digital system going to deal with that with all those ADCs [analog to digital conversions] and handshakes going on?"

"The reaction time saved by AIStorm's approach can mean the difference between an advanced driver-assistance system detecting an object and safely stopping versus a lethal collision," said Russell Ellwanger, CEO of TowerJazz.

"Edge applications must process huge amounts of data generated by sensors. Digitizing that data takes time, which means that these applications don't have time to intelligently select data from the sensor data stream, and instead have to collect volumes of data and process it later. For the first time, AIStorm's approach allows us to intelligently prune data from the sensor stream in real time and keep up with the massive sensor input tasks," said Todd Lin, COO of Egis Technology Inc.

"It makes sense to combine the AI processing with the imager and skip the costly digitization process. For our customers, this will open up new possibilities in smart, event-driven operation and high-speed processing at the edge," said Dr. Avi Strum, SVP/GM of the sensors business unit of TowerJazz.