EPFL researchers have developed a compact and efficient medium-frequency transformer. Their device is poised to enhance the flexibility and efficiency of tomorrow’s smart grids and dc power distribution networks. An EPFL-made prototype has been thoroughly tested and presented in several tutorials designed for experts from the academic and industrial worlds.

For more than 100 years, electricity grids around the world have worked with alternating current. However, direct current is now back in fashion and – thanks to advances in power electronics – is already becoming the new norm.

Today, most of our appliances such as computers, LEDs and electric cars all run on dc. Batteries and photovoltaic panels also produce dc current. And while high-voltage dc is an efficient and proven method for transporting power over large distances, the interconnection still requires legacy ac grids. If we are to one day achieve dc grids that can facilitate the smart grid concept, further technological progress in this area is still needed. This transition will require flexible, efficient and high-performance power electronic conversion devices – commonly referred to as solid-state transformers (SSTs).

SSTs can perform any desired electrical energy conversion (i.e., ac-ac, ac-dc, dc-dc, dc-ac), depending on the needs of the application. In this way they are similar to a multi-purpose Swiss Army knife.

This is where EPFL’s researchers from the School of Engineering’s Power Electronics Laboratory (PEL) come in. They have developed a way of optimally designing and producing medium-frequency transformers (MFTs), which are one of the key enabling technologies for SSTs.

The researchers have designed, optimized and built a working MFT prototype, rated for 100kW and operated at 10kHz. Following rigorous testing, it serves as the basis for technical tutorials, some of which have already been given to various specialists from the academic and industrial worlds. 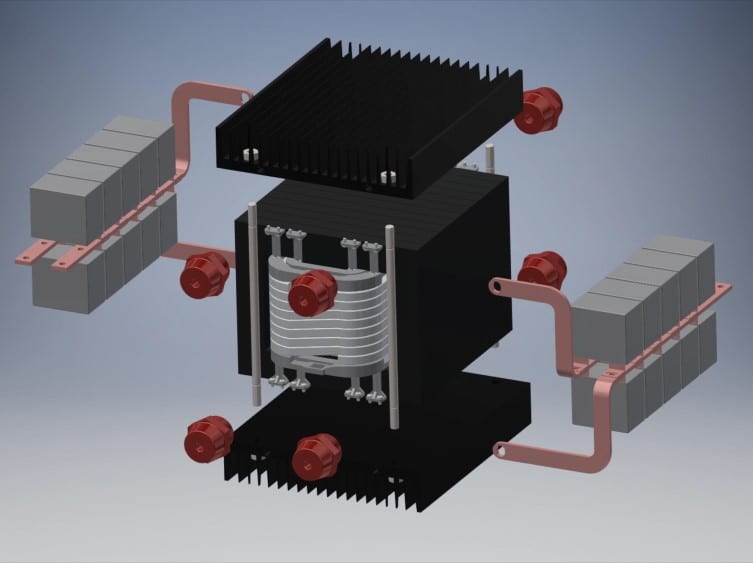 Full controllability can be achieved. “We can be highly flexible and quickly alter the power flow – and we can do that very efficiently,” explains Marko Mogorovic, one of the device’s designers. “This will be very important when it comes to integrating the intermittent energy generation from renewable sources into tomorrow’s smart grids.”

The higher the frequency, the smaller the MFT

Another plus is the small size of the device: “In an ac system, the frequency at which transformers operate depends on that of the surrounding grid. In Europe, that frequency is fixed at 50Hz,” explains Drazen Dujic, director of PEL. Since the frequency cannot be changed, miniaturization is impossible.

“In a dc system, however, transformers operate within converters at very high frequencies of up to several tens of kilohertz, thanks to power electronics. And the higher the frequency, the more compact the device,” says Dujic.

The reduced size of these transformers will be particularly useful in traction systems, in terms of both efficiency and integration: “A lighter locomotive would consume much less energy,” says Mogorovic. In traction systems, the device would transform the ac from the railway lines into dc for the traction/propulsion chain. The railway grid in Switzerland operates at 16.7Hz, which until now has translated into rather bulky transformers inside the locomotives.

At the same time, however, miniaturization represents a real challenge for engineers, who have to deal with many cross-disciplinary constraints, including thermal, dielectric and magnetic issues. EPFL researchers developed a set of sophisticated and very fast models that can quickly generate several million designs. It makes it possible to then select the best design, depending on the performance they want to achieve.

“The fact that we’ve made this type of transformer inside a lab is a major step, given the safety and function-related problems that usually arise,” explains Dujic. “We managed to get it to work perfectly. That’s what’s important for experts in this field.”