Rohm Semiconductor announced the availability of 2 new types of 650V IGBTs that combine class-leading low conduction loss with high-speed switching characteristics. This makes them well-suited for power conversion in general-purpose inverters and converters for consumer appliances, such as air conditioners and induction heaters, as well as industrial equipment, including power conditioners, welding machines, and UPSs.

A total of 21 models are offered, consisting of the RGTV series, which features short-circuit tolerance, and the RGW series that delivers fast switching speed. These new IGBTs are available for immediate shipment.

In recent years, the emergence of IoT has caused an exponential growth in the volume of data generated, bringing about a need to improve the functionality and capacity of data centers. However, as the number of servers and UPS essential to ensuring stable operation of the main power supply continues to rise, it becomes increasingly difficult to reduce power consumption.

In addition, in high-power applications that utilize IGBTs there is a need to maintain reliability by simplifying measures against overshoot during switching, which can lead to device failure or malfunction.

In response, Rohm utilized thin wafer technology and a proprietary structure to deliver class-leading performance that optimizes the trade-off relationship between conduction loss and switching speed. For example, when used in an interleaved PFC circuit, efficiency is improved by 1.2% at light loads and 0.3% under heavy loads, contributing to lower application power consumption

Also, optimizing the internal design allowed Rohm to achieve smooth switching characteristics that decrease voltage overshoot by 50% compared to products with equivalent efficiency, reducing the number of parts required along with design load. 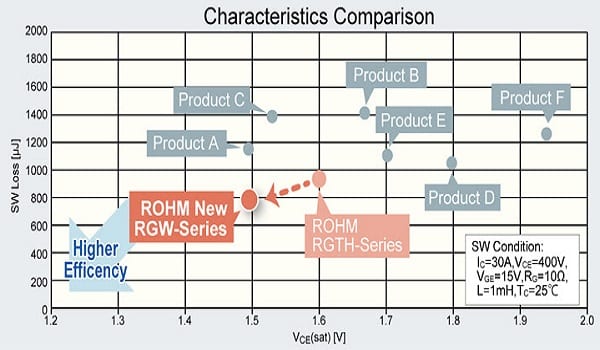 Internal device optimization makes it possible to achieve soft switching for smooth ON/OFF operation. This decreases voltage overshoot during switching by as much as 50% over conventional products, reducing the number of external parts required, such as gate resistors and snubber circuits used to control overshoot. As a result, Rohm's IGBTs eliminate the need for overshoot countermeasures on the application side, minimizing design load. 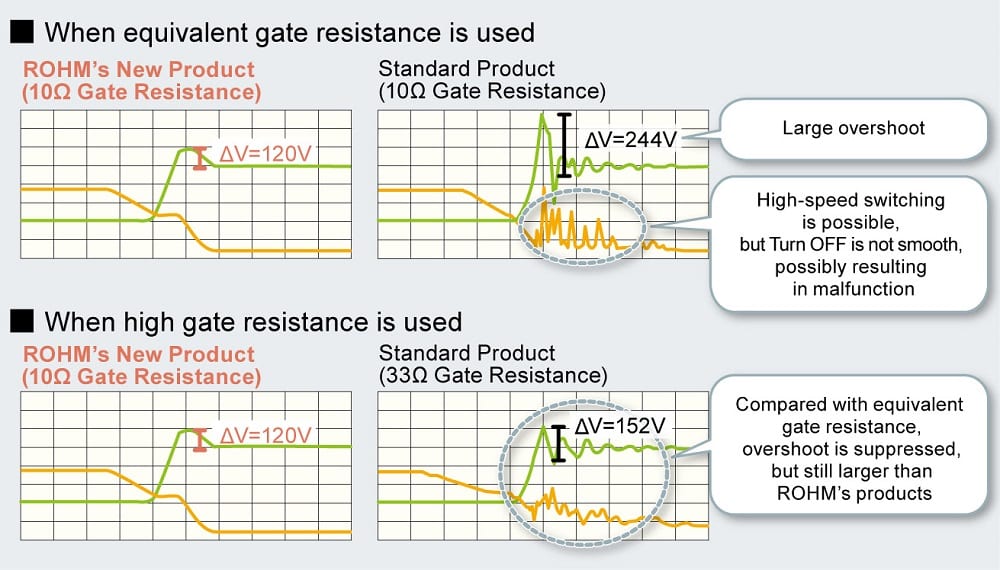 Adding 2 new series – the RGTV series featuring a short-circuit resistance of 2us and the fast-switching RGW series – ensures support for a broader range of applications: 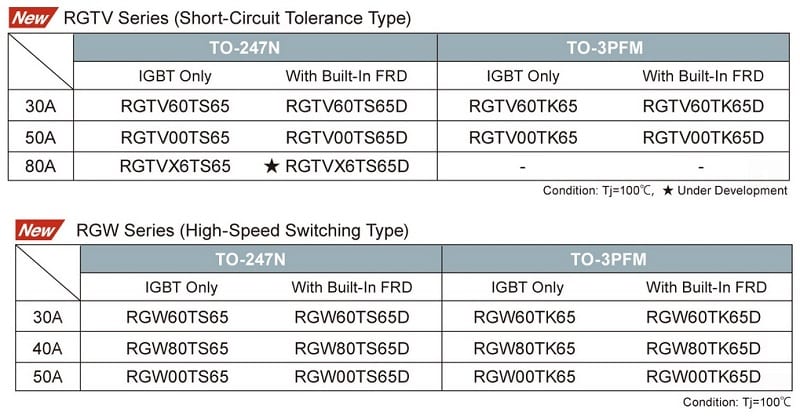