This article will provide an example of component modeling and share renowned software currently used in modeling.

Modeling is the initial phase for simulation as it helps in emulating the system behavior using specific functional mechanisms. Model of a physical system can be developed using mathematical, logical, statistical, or any other relevant methodology. A good model of a physical system serves as a basis for predicting the system behavior using simulation.

The flexibility to reconfigure and modify the model allows the simulator to run the model under different operating conditions, thus emulating the behavior under all possible conditions. This facilitates the end-to-end study of the model to understand the behavior and determine its usability for implementation and production stages. The system components for power electronic systems feature continuous or discrete and linear or nonlinear devices that can be modeled using mathematical equations. Control techniques for inverters, converters, and other systems like pulse-width modulation, voltage-based control, and hysteresis current control can be implemented using digital circuits or computer algorithms. Once component models are created and control methods are defined, computer programs can be developed for the entire system simulation.

There are two distinct approaches for modeling and simulation of a switched power converter. One method involves approximating the abrupt changes by instantaneous transitions. These discrete events can be handled using equation solvers, and the resulting model is a hybrid system that combines discrete transition conditions and continuous differential equations [1]. The other approach is to involve only continuous models and conventional solvers that are effective for such models. This approach is more viable as conventional solvers are reviewed and optimized more often, leading to achieving higher rates of accuracy and precision. Modeling and simulation results are typically used for studying system performance. The critical parameters evaluated for power electronics systems include current harmonics, voltage ripples, efficiency, power density, speed, and torque responses.

Power converters are used in a wide variety of applications. Models for converters typically contain many time constants that are continuously evolving during a simulation leading to a challenge of time in these analyses. This makes time-step a very crucial aspect of an effective model, especially during switching events. Switching components are typically modeled using ideal representation so that a constant topology system can be obtained [2]. Developing one single model that can serve most of the needs will have a clear advantage in terms of universality but might be inconvenient as it becomes vast and prone to errors due to frequent updates.

The best way to understand the nuances of building a representative system and deal with the challenges in modeling and simulation of power electronic circuits is by looking into the details of the same for a particular system. Consider a conventional DC-DC boost converter that is intended to step up a voltage and employed in embedded circuits ranging from power factor correction (PFC) rectifier circuits to RF amplifier power circuits in cell phones [3]. Depending on the application, the primary circuit can be modified to include additional components or employ different control techniques. This will help them function effectively at different power levels but makes it challenging for the designer to come up with an adequate model to cater for such versatility. Example boost PFC circuit is shown in Figure 1 [3]. Detailed switching models are complex and attempt to represent the physical behavior of the devices accurately. This helps estimate switching times, transitions and determine switching losses. Averaged models are more suitable for the prediction of converter steady-state and dynamic responses. They are less complicated and help gain physical insight and analytical results that help in the process of parameter selection and components value estimation. The averaged circuit model of the circuit in Figure 1 is shown in Figure 2 [3]. 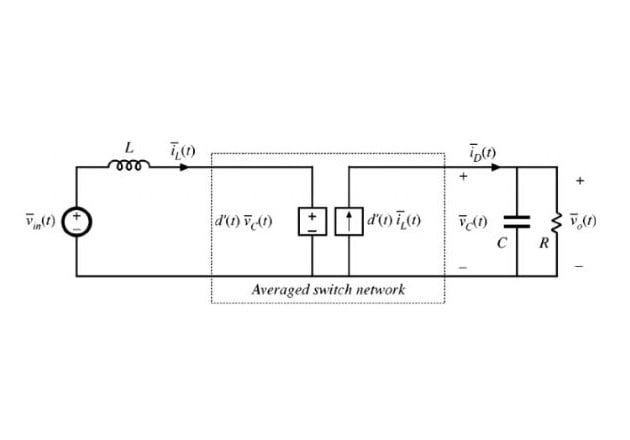 Simulation of the Designed Model

Several software packages have been proposed in recent years to cater to the simulation needs of electronic circuits. The most common ones for rudimentary analysis include SPICE and SABER. Power networks are known to utilize EMTP or EUROSTAG. In the case of complex power electronic systems, specialized simulation software like SIMPLORER, POSTMAC, PSCAD, PSIM, ANSYS or, SIMSEN can be employed based on the specific requirements. After looking into such a wide variety of options and the need to diversify the simulation environments based on the specific need or application in mind, engineers lean towards adopting libraries of models for various components of a power electronic systems. This can be accomplished by using MATLAB/Simulink software that integrates the visual design features along with the ability to utilize the flexibility and computational power offered.