“The underlying goal of the work is to make solid-state batteries more efficient and to improve the interfaces between different materials,” Sandia physicist Farid El Gabaly said. “In this project, all of the materials are solid; we don’t have a liquid-solid interface like in traditional lithium-ion batteries.” 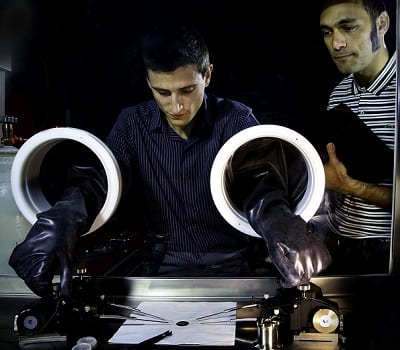 The research was published in a Nano Letters paper titled, “Non-Faradaic Li+ Migration and Chemical Coordination across Solid-State Battery Interfaces.” Authors include Sandia postdoctoral scientist Forrest Gittleson and El Gabaly. The work was funded by the Laboratory Directed Research and Development program, with supplemental funding by the Department of Energy’s Office of Science.

El Gabaly explained that in any lithium battery, the lithium must travel back and forth from one electrode to the other when it is charged and discharged. However, the mobility of lithium ions is not the same in all materials and interfaces between materials are a major obstacle.

Speeding up the intersection

El Gabaly compares the work to figuring out how to make traffic move quickly through a busy intersection. “For us, we are trying to reduce the traffic jam at the junction between two materials,” he said.

“We are essentially taking away the cash tolls and saying everybody needs to go through the fast track, so you’re smoothing out or eliminating the slowdowns,” Gabaly said. “When you improve the process at the interface you have the right infrastructure for vehicles to pass easily. You still have to pay, but it is faster and more controlled than people searching for coins in the glove box.” 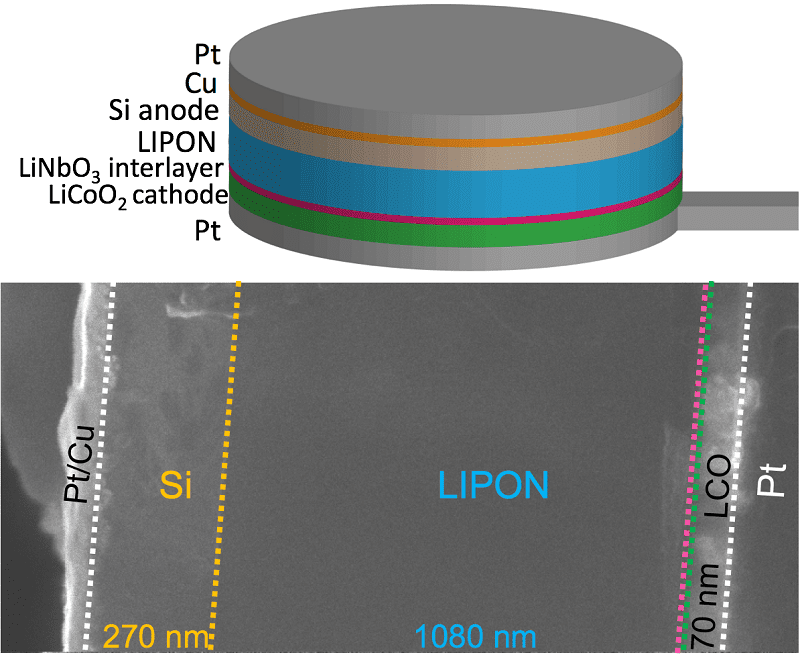 There are two important interfaces in solid state batteries, he explained, at the cathode-electrolyte junction and electrolyte-anode junction. Either could be dictating the performance limits of a full battery.

Gittleson adds, “When we identify one of these bottlenecks, we ask, ‘Can we modify it?’ And then we try to change the interface and make the chemical processes more stable over time.”

El Gabaly said Sandia is interested in the research mainly because solid-state batteries are low maintenance, reliable and safe. Liquid electrolytes are typically reactive, volatile and highly flammable and are a leading cause of commercial battery failure. Eliminating the liquid component can make these devices perform better.

“Our focus wasn’t on large batteries, like in electric vehicles,” El Gabaly said. “It was more for small or integrated electronics.”

Since Sandia’s California laboratory did not conduct solid-state battery research, the project first built the foundation to prototype batteries and examine interfaces.

“This sort of characterization is not trivial because the interfaces that we are interested in are only a few atomic layers thick,” Gittleson said. “We use X-rays to probe the chemistry of those buried interfaces, seeing through only a few nanometers of material. Though challenging to design experiments, we have been successful in probing those regions and relating the chemistry to full battery performance.”

The research was conducted using materials that have been used in previous proof-of-concept solid-state batteries.

“Since these materials are not produced on a massive commercial scale, we needed to be able to fabricate full devices on-site,” El Gabaly said. “We sought methods to improve the batteries by either inserting or changing the interfaces in various ways or exchanging materials.”

The work used pulsed laser deposition and X-ray photoelectron spectroscopy combined with electrochemical techniques. This allowed very small-scale deposition since the batteries are thin and integrated on a silicon wafer.

“Using this method, we can engineer the interface down to the nanometer or even subnanometer level,” Gittleson said, adding that hundreds of samples were created.

Building batteries in this way allowed the researchers to get a precise view of what that interface looks like because the materials can be assembled so controllably.

The next phase of the research is to improve the performance of the batteries and to assemble them alongside other Sandia technologies.

“We can now start combining our batteries with LEDs, sensors, small antennas or any number of integrated devices,” El Gabaly said. “Even though we are happy with our battery performance, we can always try to improve it more.”