The new GMR320 series handles 10 watts, and the ulta-low ohmic PSR series has been upgraded to 15 watts

The GMR320 series of shunt resistors feature resistance values over a range of 5 to 100 milliohms and can carry up to 10 watts, while members of the revamped PSR series, now rated at 15 watts, are available from 0.1 to 3.0 milliohms. 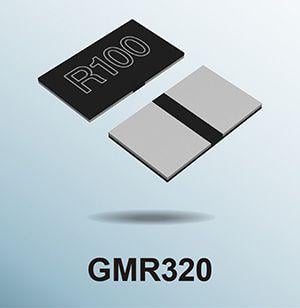 How Shunt Resistors are Employed

Shunt resistors measure current by means of Ohm’s Law, I = V/R. In the diagram below, current passes through the shunt resistor on its way to the power device. 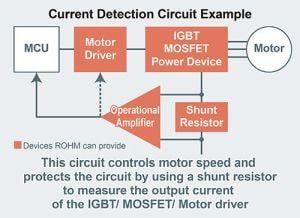 Both the PSR and the GSM320 Series

Both series of shunt resistors have tolerances specified at ±1%. They are both spec’d at a maximum operating temperature of 170°C. The high tolerance to heat makes for high reliability even in torturous vehicular environments such as the engine compartment, where temperatures can be particularly severe. 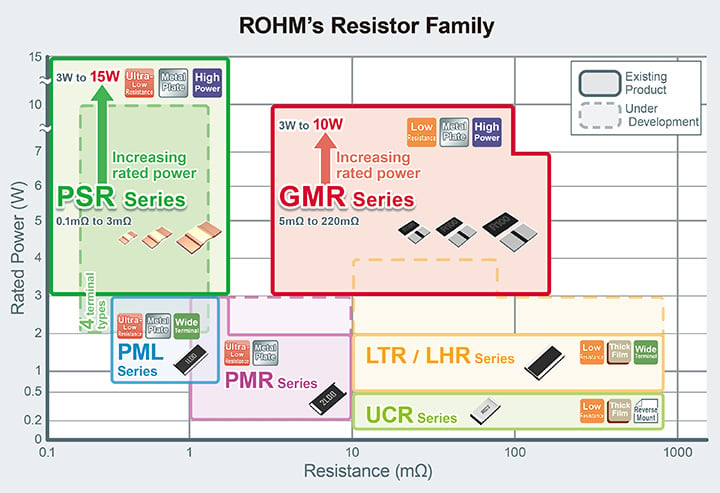 ROHM notes that when a standard 5 milliwatt resistor dissipates 7 watts, its temperature can reach 154℃. The GMR320 devices will rise to only 117℃ when similarly stressed. The difference is 23%, even though series members measure only 7.1 x 4.2 mm, the smallest 10-watt devices on the market.

The GMR320 series features a temperature coefficient of resistance (TCR) of ±25ppm/°C or less. This is true even in the low resistance, 5 milliohm range, where resistors most often fall short. According to ROHM, it beats the competition’s TCRs by about a factor of two.

Targeted for October 2021, ROHM plans to make thermal simulation models for shunt resistors available through the company’s website. Users will be able to zero in on any possible heat issues very early in the design cycle, saving many hours of design time that might otherwise be required to deal with problems later on. This will be particularly useful in high-power applications, where thermal design issues can prove to be particularly vexing.

Expanding its resistor lineup is an ongoing commitment for ROHM. The company offers a wide variety of current detection resistors, online listings available below

Both series are AEC-Q200 rated