Learn about both T- and Zigzag- transformer wiring connections in relation to synchronous converters.

There are several common arrangements of T-connections that give useful output voltages. For example, if a source is 3-phase 2400 V, two transformers can be connected to give 3-phase 240 V at the secondaries. The teaser is connected to the 50% tap of the main transformer. The vector diagram shows 207.8 V across the teaser secondary. See Figure 1.

Figure 1. In a T-connection, one of the units is the main transformer and is provided with a 50% tap to which a teaser transformer is connected. 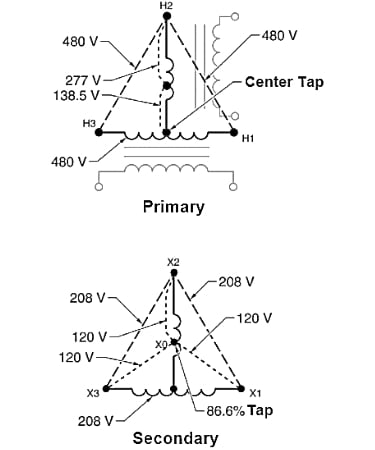 Industrial lighting systems often use 277 V. This is typically derived from the line-to-neutral voltage on a 480 V system. However, there is no fourth wire for a neutral in plants that have a 3-wire, 480 V ungrounded, or corner-grounded delta. 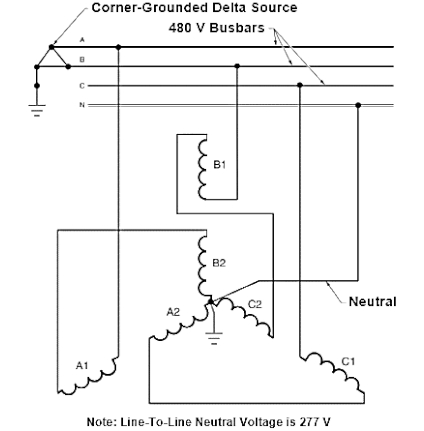 Figure 3. A zigzag transformer can be used to develop a neutral from a 3-wire, 480 V source.

In the case of a 3-phase synchronous converter, the input power is from a bank of transformers that are connected delta on the primary side and interconnected wye on the secondary side.

The single-phase impedance of a transformer with a zigzag secondary is less than the impedance indicated on the nameplate. Fault currents must be calculated using the lower impedance of the zigzag. Failure to calculate properly can result in serious injury and equipment damage from arc flash or explosion.

In a 3-phase system, the flux distortion caused by a synchronous converter can be eliminated with an inter-connected wye connection in the secondary. An interconnected wye connection is a technique of wiring transformers where two separate windings are interconnected on each phase in a zigzag manner. See Figure 4. The unbalanced current from the synchronous converter flows into the neutral of the interconnected wye windings and divides equally through each of the three legs. The unbalanced current flows in opposite directions in each secondary.

Figure 4. An interconnected wye secondary can be used to eliminate any flux distortion caused by a synchronous converter.

Figure 5. A double-delta connection can be used to create a 6-phase source for a synchronous converter