Vietnamese Automaker VinFast Brings its First EVs to the U.S.

Vietnamese Automaker VinFast Brings its First EVs to the U.S.

The first of VinFast’s electric vehicles will be shipped from Japan, but eventually, the startup company will manufacture its EV SUVs in North Carolina.

When you think of Asia and electric vehicles (EVs), China and Korea come to mind. At the end of 2022, however, VinFast, a startup carmaker from Vietnam, began importing its VF 8 battery-electric SUV to the U.S. The EVs are being built in the company’s factory in Hai Phong, Vietnam, with the first 999 vehicles being shipped to the U.S., which is also VinFast’s first export market. Shipments to Canada will follow soon after.

The VF 8 model is a five-seat electric SUV that is available in two versions, both of which have all-wheel-drive. The VF 8 Eco has dual electric motors with a 353-horsepower maximum power output and a range of 260 miles. The VF 8 Plus model has 407 horsepower and an expected range of 248 miles on a full battery charge. Both models have advanced features such as automated lane changing assist, smart parking assist, a smart summon mode, and remote parking assist, as well as fully integrated interconnectivity and in-car entertainment.

The primary purpose of the battery subscription scheme is to reduce the initial purchase price of the vehicle by removing the cost of the battery. In addition, because VinFast covers the subscription batteries with a lifetime warranty, the company maintains responsibility for any and all battery repairs, maintenance costs, and replacement should it become necessary during the vehicle's lifetime. The company says it will replace the batteries when the charging capacity drops below 70 percent of its initial full-charge capability. By controlling the ownership of the batteries, VinFast also claims it will be able to develop more effective programs to reuse or recycle its EV batteries. 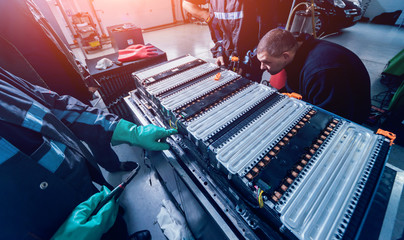 In early 2023, VinFast also plans to launch its VF9 model in the U.S. This three-row, full-size battery-electric SUV will also come in Eco and Plus models, although both will have the same 402-horsepower all-wheel-drive powertrain. The range is estimated at 369 miles. The battery subscription plan will also be available for $219 per month, with the VF9 base price at $57,500 with a battery subscription and $76,000 without the battery plan.

Building Electric Vehicles in the U.S.

VinFast was established in 2017—it owns an automotive manufacturing facility in Hai Phong that features up to 90% automation. The company is also working on a $2 billion manufacturing facility in North Carolina to build VF 8 and VF 9 models, battery packs, and potentially electric buses, and that is scheduled to open in its first phase in 2024. The expected capacity for the North Carolina plant will be 150,000 vehicles per year, while a second $2 billion phase is expected to bring production to 250,000 EVs per year and employ 7,500.